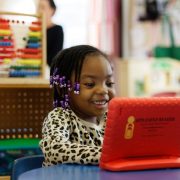 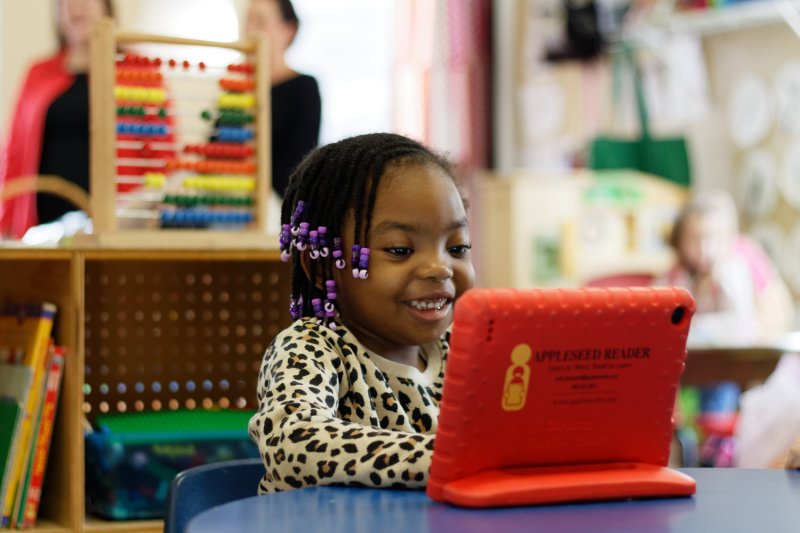 “We aren’t looking for advocates anymore, we are looking for accomplices and we have them in Davie County,” says Greg Alcorn, founder of ApSeed Early Childhood Education. “The Mebane Foundation has been the rockstar of all partners for ApSeed.”

The Mebane Foundation and ApSeed Early Childhood Education joined forces last spring to increase literacy scores among at-risk children in Davie County by providing a free e-Reader preloaded with applications designed to help children start school kindergarten-ready. From music that will soothe a newborn to games that teach simple spelling and math, the tablet’s carefully selected apps meet the developmental needs of children from birth to kindergarten.

“ApSeed strives to help children stay age proficient at home, so they can be grade proficient in school,” said Alcorn. “Our goal is to provide a Seedling to every socioeconomically disadvantaged child 0-4 years old. We believe the ApSeed Project will level the playing field while also being a tool for real and lasting enrichment.”

Through a $105,000 grant from the Foundation, almost 1,000 custom-built tablets, called Seedlings, have been distributed free of charge to children 0-4 whose families are enrolled in the WIC program through the Davie County Department of Public Health, Parents as Teachers through Smart Start of Davie County, or Davie County’s NC Pre-K program.

“We’re always on the lookout for best practices and resources to support our youngest readers, with this partnership and with the Seedling I believe we’ve hit a home run!” said Larry Colbourne, president of the Foundation.

Colbourne believes the Seedling is a valuable tool to support DavieLEADS, a five-year early literacy initiative funded by a $2.5 million grant from the Mebane Foundation. The initiative seeks to improve kindergarten readiness from 70% to 90 percent and to increase reading proficiency in third grade from 60 percent to 80 percent by 2022.

In order to receive a Seedling, parents must provide their email address and agree to complete a short, five-question survey which is emailed every 90 days. ApSeed measures the results of the surveys in order to evaluate the effectiveness of the Seedling and to continue perfecting its programming. Questions include 1. How are you using the Seedling? 2. How much per day? What is your child’s favorite app? 4. What is your child learning? 5. What is the Seedling doing for you as a parent?

It is too early to make research-based conclusions in Davie County, but Alcorn said the ApSeed internal survey results have been favorable and no one has expressed that their child has experienced boredom or burnout with the device.

Responses have included: “At first he couldn’t say the alphabet but now he can use ALL of the letters,” “likes tracking letters and is trying to learn to spell words,” “the twins were born early and their speech is behind but now they are catching up,” “I can hear her singing with the tablet,” and “plays with it until the battery is dead.”

Usage by age has been consistent with Rowan County. Children begin with the music app and transition to letters and numbers as they get older. ApSeed’s analysis for Davie County explained the progression.

“Under the age of one, the music player (Pulsar) app is used the most. Pulsar can play songs over and over, meaning the Seedling can allow the infant to listen to pleasant music. Since the parent/caregiver is operating the Seedling, bonding is the most helpful value the Seedling does for the family.

Ages two and three show an amazing increase in learning colors and shapes. Parents notice this as well. The child is learning to read. Therefore, bonding decreases because the child is more independent.

At age four children use the 123 Numbers and ABC Kids apps the most because they have already learned the colors and shapes. These apps encourage tracing letters and numbers, so the children are learning to write. We have observed children tracing their letters on the Seedling, then grabbing a piece of paper to try to replicate what they just learned demonstrating the child is ready to learn to read. The Seedling is so familiar by age four that it is very easy to use. At this stage, the child is ready to enter Kindergarten at the age proficiency of the other children.”

Based on what ApSeed has learned, the apps are arranged on the tablet in age-proficiency order. Alcorn says this will help parents help their child be kindergarten-ready. Ideally, a child should spend about 400 hours over the four years using the Seedling. 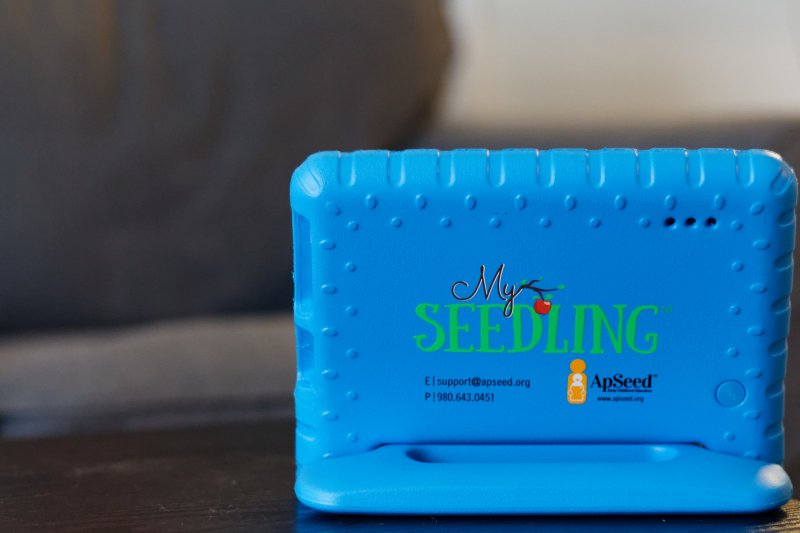 “Students less than 50% proficient in school are less likely to catch up. It’s too late when a child is in the 8th month of third grade to expect them to be able to make up for six years of not being close to age proficient and to expect them to pass the end-of-grade reading test. That’s what we are charged up about, helping children get to where they are supposed to be.”

ApSeed is now brainstorming ways to increase parent/caregiver response rates. “We want to figure out if there are additional things we should be doing to reach out to parents to find out how well the Seedling is working for their child since the response rate to our surveys is about 25%,” said Alcorn. “Most would say that’s a great return but it’s not to me. We want to be able to take a comprehensive look at the other 75% in order to know if the responses we are getting from the 25% are representative of the children as a whole.”

“We want to identify any additional needs the children might have because we have room for more apps. We also have six tutorial videos about operating the device that we’d like to get to parents.”

ApSeed also hopes to expand its social media presence so that everyone learns about the benefits of the Seedling. “The ideal situation would be to have every parent/caregiver and every person involved in the child’s life on our Facebook so that they support each other and get guidance from each other.”

“Eventually, we would like to get to where the Seedling is recognized as valuable for all of North Carolina so that it can be distributed through public funding instead of just private funding, that’s our next goal.”

Alcorn may soon get his wish. Representatives Horn, Warren, Lucas, and Howard have sponsored a bill to the North Carolina General Assembly recommending that the  Department of Health and Human Services, Division of Child Development and Early Education, establish a three-year pilot project to implement the ApSeed program in Forsyth, Hoke, New Hanover, Watauga, and Yadkin Counties beginning in July 2019.

To learn more about the history of ApSeed in Davie County please visit https://www.mebanefoundation.com/davieleads/apseed-and-mebane-foundation-join-forces-to-provide-1000-mobile-touchscreen-tablet-e-readers-free-to-qualifying-davie-county-preschool-children/

ApSeed Early Childhood Education is privately funded through foundations and donations. For more information about ApSeed visit apseed.org or call (980) 643-0451.