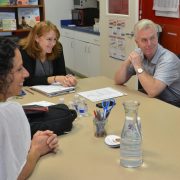 Note: This article, by EdNC staff, was originally published on February 26, 2019 on Education NC (EdNC – The Mebane Foundation leads Davie County Schools into the future) and is republished here with permission. 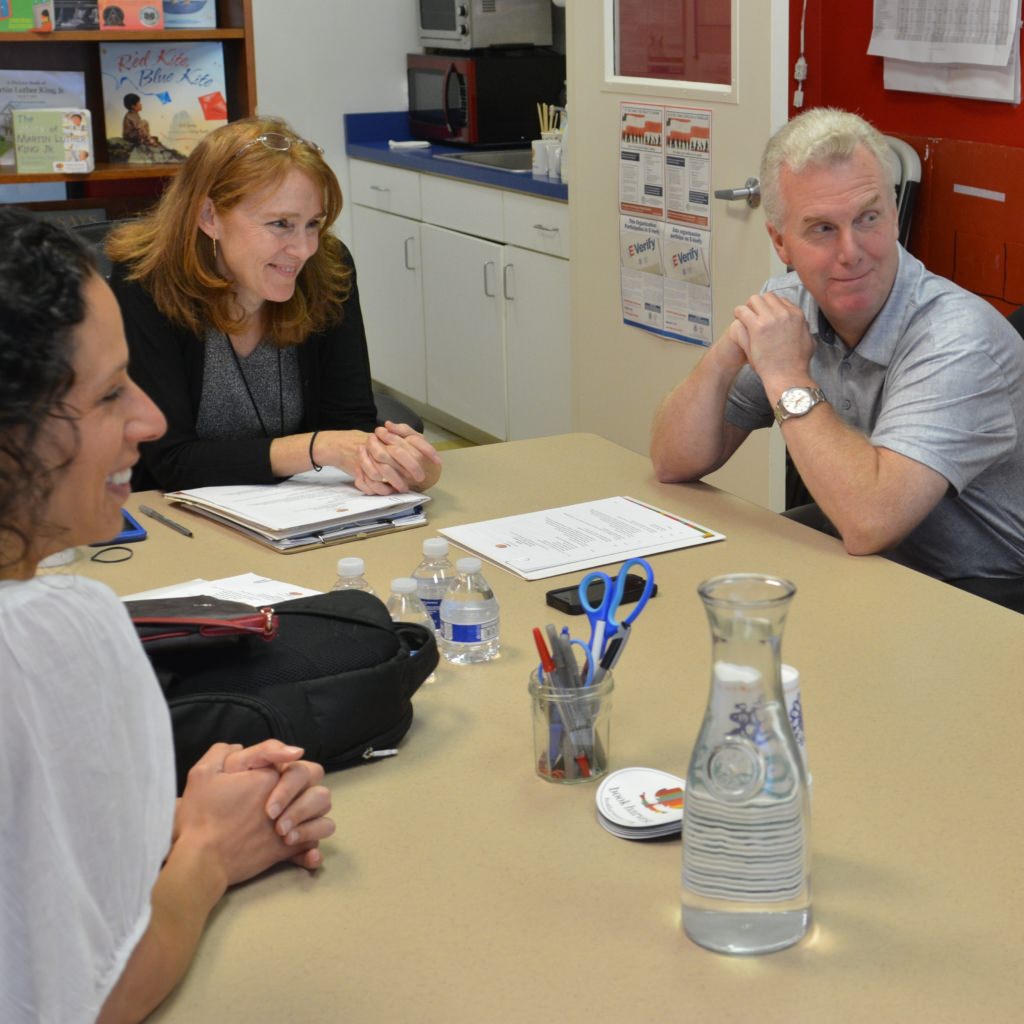 Larry Colbourne, Mebane Foundation, listening and learning from the team at Book Harvest.

As part of the EdNC series on early-grade literacy, EdNC is focusing on what Davie County is doing to improve kindergarten readiness and reading for students by third grade. Part of the strategy Davie County Schools is using involves funding from the Mebane Foundation, which has launched a five-year, $2.5 million initiative called DavieLEADS. We’ll be talking a lot about DavieLEADS this week, but first, here’s a Q & A with Mebane Foundation President Larry Colbourne to kick things off. The interview has been edited for clarity.

Q: Tell me a little bit about how the Mebane Foundation has been intervening in schools in Davie County historically.
A: Since its beginning in 1998, the Mebane Foundation has been actively involved in numerous initiatives in Davie County. Many of those revolved around literacy interventions and helping kids reach their potential before third grade. The Foundation supported the Hill Center as it developed HillRAP and other programs that made its product even better and purchased Smart Boards and other technology for the school system to try and help teachers do their jobs better. Since I joined the Foundation in 2007, we have continued to be literacy driven. For a while, we veered away onto a professional development model, which wasn’t a bad thing, because we partnered with more county schools as well as the Mooresville Graded School District. However, we came back together as a board in 2016 and said, “Okay, is this a direction we want to keep going in? Professional development is important, but do we want to go back to our roots, which is literacy?” And what came out of that whole process was, “Yes, we do.”

Q: How did that lead into DavieLEADS?
A: It all began with a report I read by Dr. Jim Goodnight of the SAS Institute for the Business Roundtable. He was getting ready to make recommendations to the state about what needed to be done to help children with literacy. The report included six recommendations, and as I read them, I thought, “You know, that’s exactly what my board is talking about, those six bullet points. Why couldn’t we do this?” Their recommendation was to go to the state, and hopefully get some movement there to try to support some of the recommendations. I said, “You know what? Why don’t we try and partner with a school system and see if we can’t prove this out.”

Several of the bullet points were similar to initiatives the Foundation had worked on individually in the past. It made sense to combine them together and to propose a partnership with one school system. We were already in Davie County and had all of the resources and all of the connections, so we decided to try to make a go of it. I sat down with Dr. Hartness, the superintendent, and I said, “Dr. Hartness, do you think based on what we’re seeing here, we can move the needle in Davie County in the next five years?” And that’s how it all started that January.

And then we met many, many times. It was called the Mebane roundtable and included senior leadership from the school system, top teachers in the area, and some folks with Smart Start and other groups. We came up with this plan and presented it to the board in April 2017. DavieLEADS was based around what we had seen in that business roundtable, “Why Reading Matters and What to do About It. And when I look at how we’re executing it, it really does match up with those six policy recommendations.

Q: Give me a high-level view of what DavieLEADS is.
A: When we got together in the Spring of 2017 we said, “What are the one or two most important things for getting kids ready and able to read after third grade?” The first thing, we all knew, was pre-K, and making sure that all children show up to kindergarten ready. Our first metric became kindergarten readiness scores. At that time we were at 70 percent ready. We decided push for 90 percent in a five year span. That became our first goal.

We then decided to vertically align kindergarten readiness with third-grade EOG (End of Grade) scores. At that time, Davie County was at 60 percent reading proficiency and the best district in the state was at 80 percent. Our second goal became increasing reading proficiency from 60 percent to 80 percent by 2022, which would put Davie County at number one in the state based on that year’s numbers. Those were the two metrics we decided to use. In the past, we’ve started with kids in kindergarten and tried to have them reading by the third grade. This time we decided to go deeper, back to the pre-K world, which is a huge part of this project.

Q: How is the funding used with DavieLEADS?
A: A lot of the funding has been for professional development to help the teachers. We brought in two consultants and hired two K-3 literacy coaches. It’s their role for the next five years to ensure the fidelity of the program that we’re trying to implement in the six elementary schools. We also hired a pre-K teacher coach to help vertically align what all the pre-K’s are doing, not just the ones in the school system but also the private facilities. When the children show up for kindergarten, we want them to have all had access to the same things taught in a school-based NC Pre-K program.

The consultants also worked with the leadership and teachers at each school to build PLCs (Professional Learning Communities) that provide teachers the opportunity to meet on a weekly basis to discuss how things are going and to ensure that the program is being implemented with fidelity.

Q: How do you feel it is going so far?
A: I try not to get too caught up in the results, but the first year’s results were phenomenal! Davie County Schools went from 45th to 17th in the state in 3rd grade reading proficiency. We’ve seen a 4 percent increase in our EOGs, and a 10 percent increase in kindergarten readiness scores, but more importantly, and what really makes me happy, is to listen to teachers talk and know that there has been a cultural shift. So I think it’s going great. All that being said, who knows?

I have no idea what the new cohort coming through this year looks like. I’ve learned over time that cohorts are often very different and last year’s might have been an “A” team coming through. But what I’ve seen in the way the teachers, the leadership, and the community has rallied around this initiative, is the best I’ve seen since I’ve been here. We’ve tried many partnerships with large dollar amounts and large initiatives, but this thing right now is as good as it gets.

Q: How do you make this sustainable after the money from the Mebane Foundation is gone?
A: When Mr. Mebane was alive and I started working with him, our goal was to provide funding for three years. We would inject a lot of capital, prove a model, and then hope either the county school system or someone else would say, “Wow, this thing worked, let’s go ahead and take over the funding for the remainder and sustain this through time.”

Deep down, that’s still what we want to do. Basically, the budget comes down to about $400,000 a year in year five. From my perspective, I don’t think we will be able to live by that model where we pull out totally. If 2022 rolls around and we’ve moved the needle by like 15 points over a five-year period, I would hope the local municipality in Davie County would say, “Okay that’s huge. We need to go ahead and pony up a little as well,” but we haven’t had those conversations yet. As the Mebane Foundation, I would say, listen, we’re not going to back away. Let’s look at what it would cost the state. Maybe we can split the difference. We know if we’re going to sustain, the school system is going to need additional money, and in this environment, it’s difficult to find those funds. Although we’re not going to walk away totally, we would hope in good faith, whether it’s Davie County or anywhere else we’d partner with, that once leadership at the county level sees these types of gains, they would jump in and say we’ll pay some here.